I finished the peerie Fair isle jumper a couple of weeks ago (isn't it great when an UFO becomes an FO?).  We haven't had very good weather over the last week or so, but the sun was shining on Saturday so we headed to Minn beach at the south end of Burra-Isle (5-10 min drive from our house). 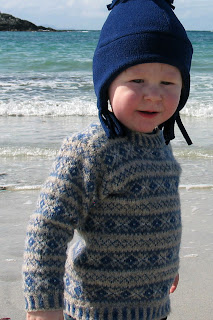 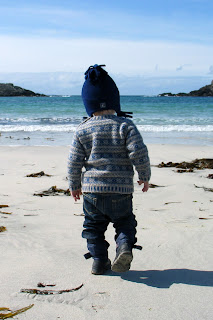 It's a good fit (thankfully) and it is good for digging in the sand and gathering stones as we discovered.

I tried knitting it without putting buttons on the shoulders but no matter how much I pulled it wasn't going over his head. I undid the neck, opened the left shoulder (the arms were attached by this time)and added in an opening with buttons which makes it much easier to put on. Serves me right for being lazy and thinking I could get away without putting in the buttons.

I used my Mum's old jumper board to block the jumper; Shetland wool benefits from being dressed and at one time every home in Shetland would have had at least one jumper board.  This one was made by my Grandad and has seen many garment over the years: 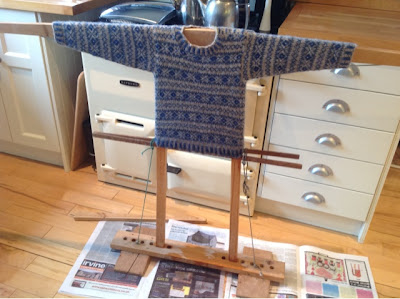 The pattern were taken from a little jumper I borrowed from my friend Wendy of Burra Bears shown here modelled by the lamb on the right - this fantastic photo taken her Brother Kevin Ritch has been made into greeting cards and you can see them on the Burra Bears website. To Joseph's jumper I added a coloured 2x2 rib and used wool I had in my stash - a good way of using fairly small amounts of wool.

Since then I have made my first headband, the pattern is by Hazel Tindall (the World's fastest knitter), you can download the pattern here 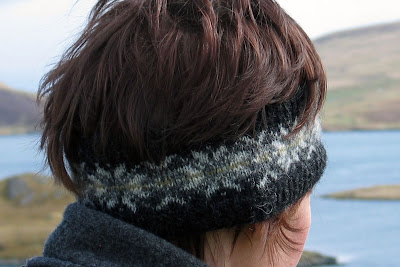 It only took a few hours to knit and is a great thing to knit as a first Fair isle project.  Its also a good way to try out colour combinations.  I used Shetland yarn from Jamieson's of Shetland in 6 different shades of grey and one row of sage green in the middle of the pattern.  I changed colours in the background rather than foreground colour as the pattern suggests.  That's the beauty of Fair isle knitting, there are so many ways of doing the same thing which can create hugely different effects.

I have a couple of extra rows in the rib as I knitted too much (got distracted) and it seemed a shame to take it back.  It works OK but I will make sure I stick to the pattern next time. 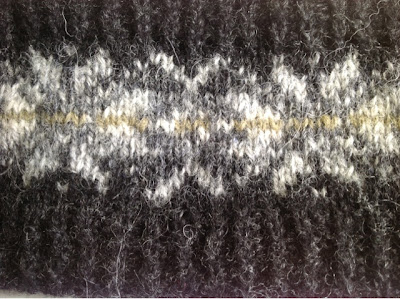 I am now working on gloves to match - more about them later.

Work news: I decided a few months back that I wouldn't work in the evenings unless I absolutely had to as I spent so many years with no time to myself.  This means I don't have a lot of time during the day to make products to sell other than fulfilling my orders from Not On The High Street, but I am "picking away" as we say here and hope to have some scarves into the shops soon, although it is an extremely slow process as pin and needles and toddlers don't mix very well.  I have decided that Joseph won't be little for long and I want to enjoy the time at home with him without being stressed about the unfinished pile of work on the desk. 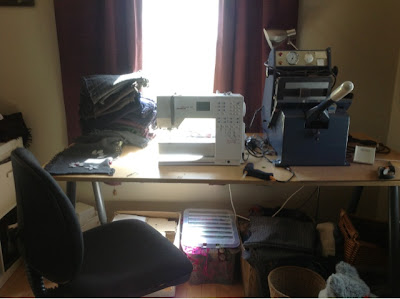 I am working on a range of laser cut products which will reduce my time spent on each item, once I have sourced the materials I will be ready to go.

In the meantime - happy knitting!