When I was little, part of the daily "uniform" usually consisted of some sort of woolly jumper, often fair isle and usually hand knitted by a relative.  Here is myself and my cousin Ingrid sporting fair isle jumpers a few years ago..... 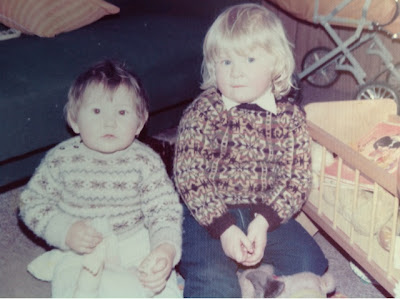 As I was growing up, my Mum and both Grannys spent a lot of time knitting Fair isle. Knitwear, and in turn knitting, became unfashionable, so I never wanted to be taught Fair isle garment construction, which is something I regret. I have knitted many garments from patterns but never knew how to create my own designs. Traditionally garment construction wasn't written down but was something that was "just done" and skills were passed on from one person to the next.  Women used to spend their evenings together knitting and passing on these skills. 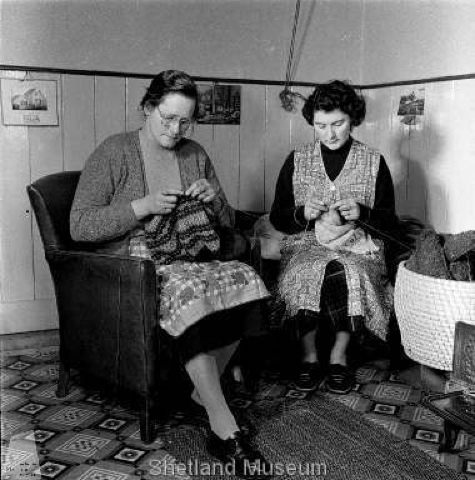 Image from Shetland Museum Photo Library
Last winter I attended a night class in the local primary school. Each Tuesday night for ten weeks, I went with 8 other women to learn to knit a traditional fair isle jumper. Knitting a Fair isle jumper is basically about scaling up proportionately and having a pattern repeat to fit the number of stitches (or sometimes the other way around).

In order to learn the basic construction we knitted a mini jumper. 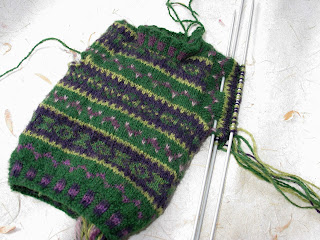 I haven't finished it as you can see, mainly due to the fact that the nightclass mainly took place during November and December last year which is my busiest time of year and also leaving it like this shows the construction details better.  Jumpers can be made any size you like, its all about proportions and fitting in patterns.  Nevertheless, I thought I should start small and I have been working on a little jumper for Joseph. 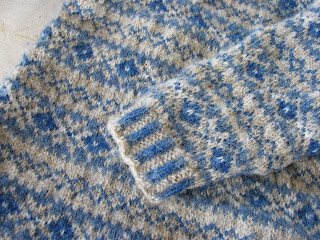 I cut the steeks in the armholes last night, I have never done this before so my heart was in my mouth - I reinforced the cut edge first by a couple of rows of machine stitching, my Mum and Granny did this and it means you can have a neat hem that doesn't need stitching down. 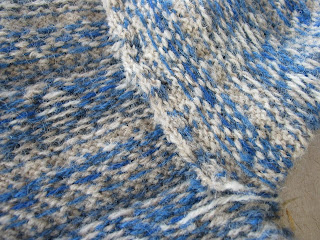 My least favourite bit of any knitting project is the finishing, look at all these ends waiting to be woven in......*sigh* 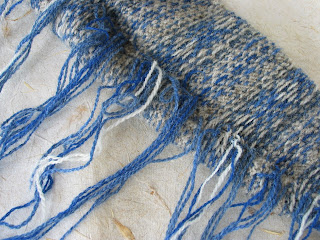 But the most exciting thing about finishing is the prospect of starting a new project - just look at all this yarn I have inherited just waiting to be knitted up. 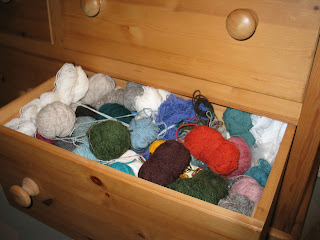