I first met Susan Crawford at the makers market during Shetland Wool Week in 2013.  I recognised her as the author of the vintage knitting books A Stitch In Time volumes 1 and 2 and there was that moment when you feel you know someone as you have seen their picture online but they don't know you!  She was lovely and very easy to speak to - she bought a brooch from me and we had a fascinating discussion on knitted swimsuits! 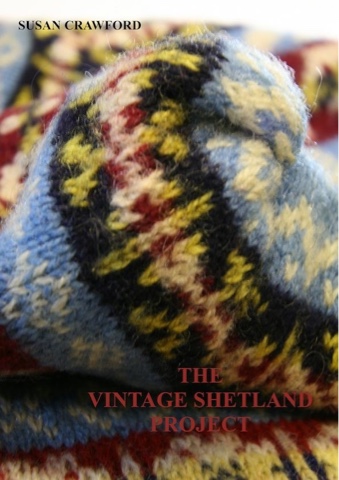 Susan has been travelling back and forth to Shetland for several years to the Shetland Museum to work on creating patterns for several knitted garments that are in the museum's collection.  With the support and help of Dr Carol Christiansen (whose knowledge of textile history is enviable) she has painstakingly looked at and documented each garment stitch by stitch, while looking at the construction, which was quite puzzling in some of the pieces. 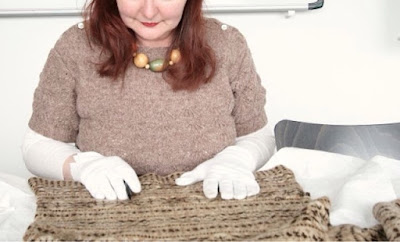 Susan examining a Fair Isle jumper in the museum collection

This work will be published by Susan as a book later this year, with details on the history of 25 pieces (which I am really looking forward to reading), multi sized patterns for each garment as well as a chapter on the work involved in the research. Additionally the samples will be photographed in Shetland using local models.  This blog post is the last in a series of posts of a Blog Tour, "To Shetland and Back" to help promote this project.

The Shetland museum holds a huge collection of amazing knitwear, most of which have been knitted by what might be said to be "ordinary folk" and have been donated.  At one time almost all women in Shetland spent much of their time hand knitting, mostly to sell.  Very often patterns and colours were stipulated by the buyer or agent but Fair Isle knitting lends itself to experimentation and self expression and many pieces can be described as a work of art.

Generally in Fair Isle patterns weren't used (and still aren't - I have heard many knitters say they just lay on loops (cast on stitches) and see what happens!), there might be a garment or sample piece to follow if it was for a specific order and techniques were passed down through word of mouth.

We can learn so much from the past, and although it's a bit of a cliche, these textile pieces are a way of connecting us to the past. I am glad I have several of the garments my Mam made, and I can remember seeing the knitting process in most of them.  There is so much more sentiment in those handmade items than there are in any of her other clothes.


It is vitally important that these details are written down, knitting doesn't feature so prominently in our lives here anymore so we must find ways of holding on to these traditions.

As part of the blog tour we were asked to choose an item from the collection and show it in our posts.  I have seen the garments that have been chosen for the book and I love them all, each one brings something different.  However, I particularly love these gloves. 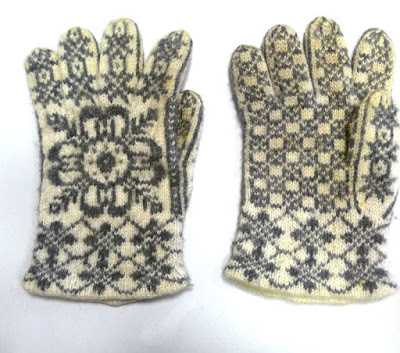 The strong connection with Norway began in the 1940s due to a rise in the number of Norwegians coming to Shetland during the second world war.  When Germany invaded Norway, several thousand people fled Norway, most of whom were transported to Shetland through the Shetland Bus, a system of boats that transported refugees out of Norway to Shetland. Many of these people settled in Shetland and this influence could be seen up in the knitwear in the 1950s and 1960s and still can be seen in many designs today.

The gloves show a modified star, almost like a rose which is softer than the traditional spiky star, I think they are as contemporary today as they would have been back them, I definitely want to make a pair for myself!

To help Susan pay for printed copies of the book she has set up a Crowdfunder campaign through the platform Pubslush and to raise money.  Other costs that will be covered include photography, model's fees, technical editing etc. - basically, lots of things need to be paid for when publishing a book.  Initially Susan set out to raise £12,000 to cover these costs, but amazingly she reached this target within 48hours!  Tonight the total has reached just over double that figure - Susan says the extra money will be used to pay for more photography, more licence fees, etc.  You can read more about this over on the Pubslush page here.  Basically its a way of pre-ordering a copy of the book but helping with the production costs at the same time.  But hurry - there's only 2 days left!

Susan will be having a trunk show during Shetland Wool Week 2015 on Thursday 1st October in the learning room at the Shetland Museum and Archives from 1p.m. - 4p.m. There will be several of the recreated garments on show and you will get a chance to speak to Susan.  This event doesn't require tickets or booking and it is free entry, so its a good way to spend part of an afternoon.

This is the last stop of the blog tour, we started in Shetland with Knitbritish and we have ended up back in Shetland and its over to Susan's blog tomorrow.  Have a look through the blog posts in the tour - you will get a glimpse of some of the garments that will be featured in the book, and there are some beauties!.