I have been thinking quite a lot lately about Shetland haps.  A hap is a hand knitted lace shawl, usually square but sometimes circular or triangular in shape.  The photographs below shows the hap my Great Aunt Emma knitted when my son was born three years ago. 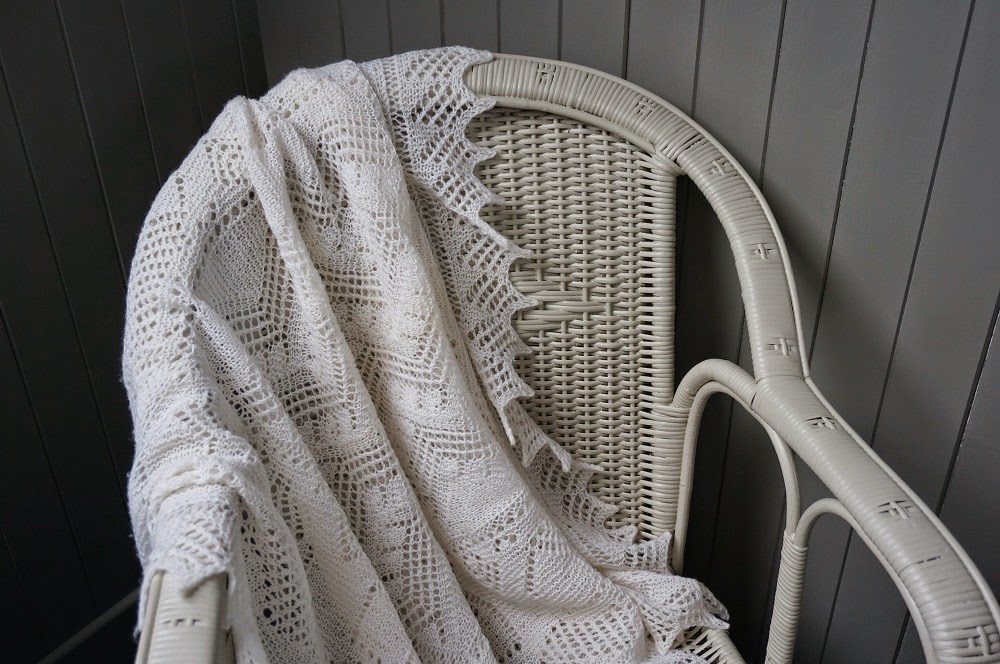 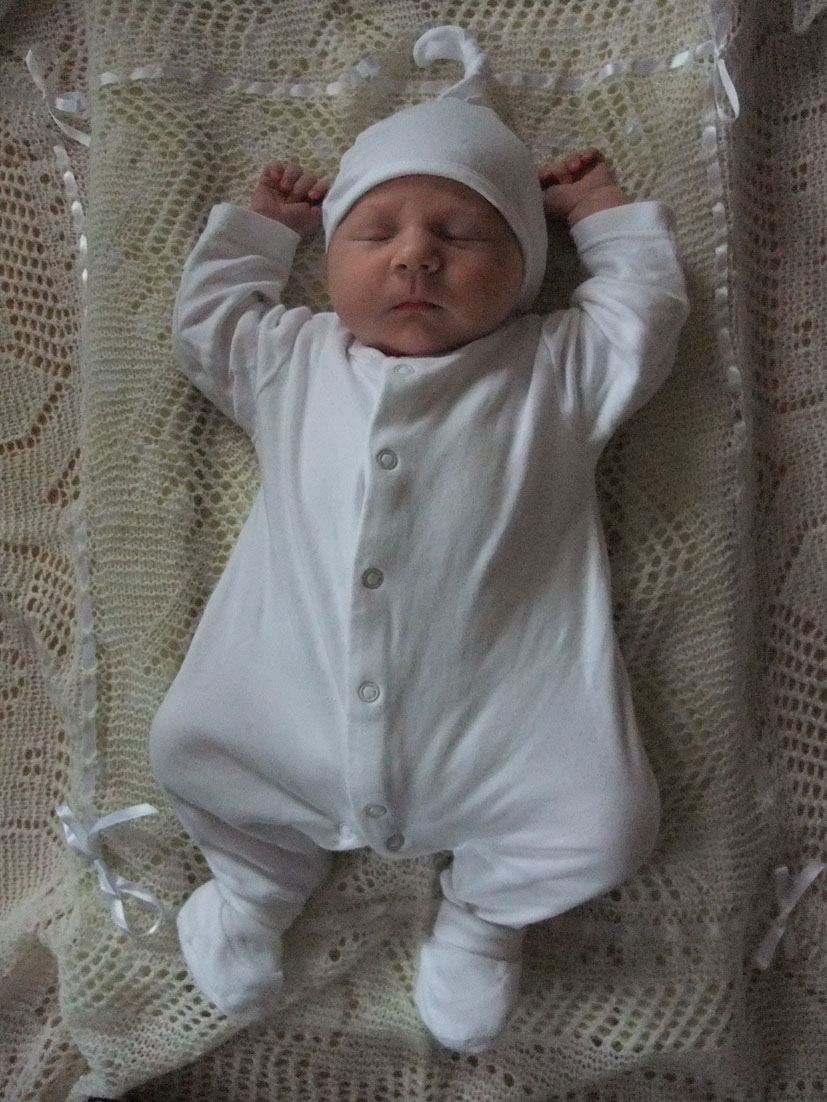 Haps traditionally were worn as everyday garments, many photographs can be seen on the Shetland Museum website of women wearing these warm wraps around their shoulders when out walking,

Image from Shetland Museum and Archives
working on the croft or carrying the peats home in kishies.

Image from Shetland Museum and Archives
In recent years they have become more decorative and intricate and are generally made up of three sections, the centre, the border and the edging. 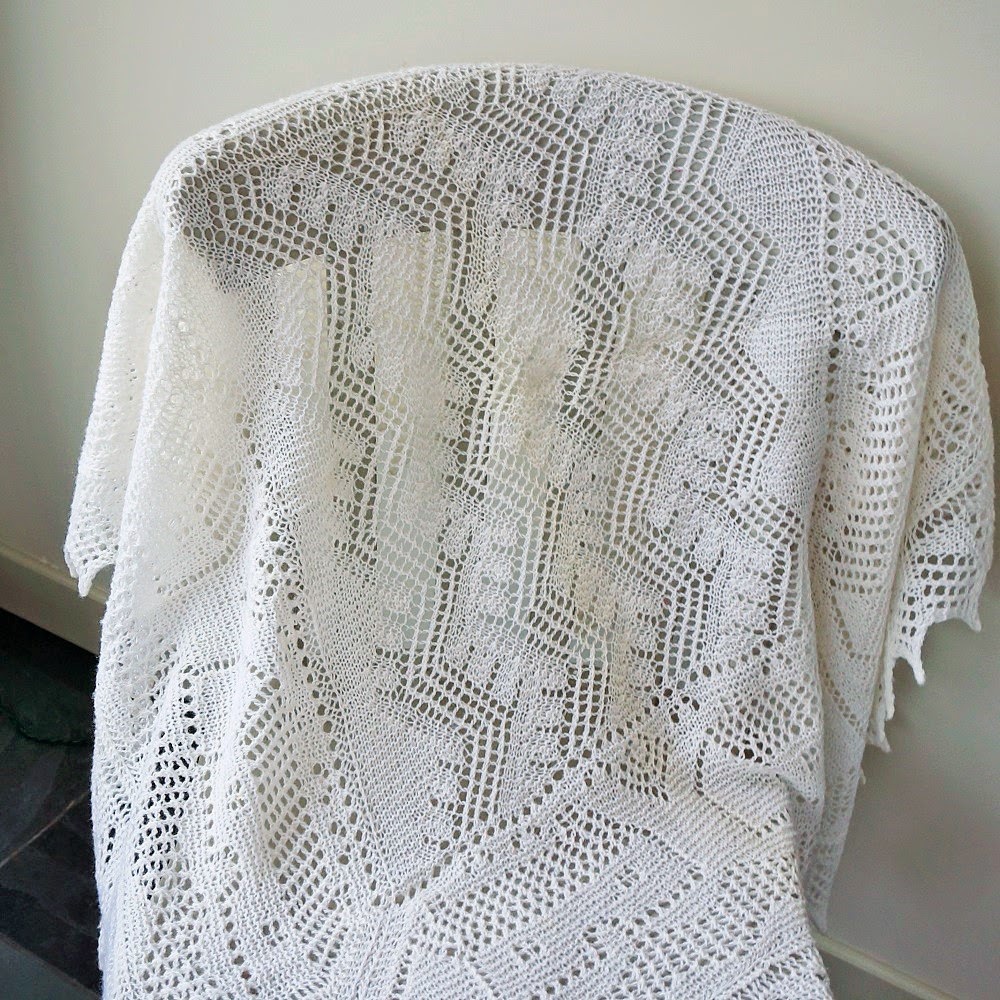 Last week I visited Aunty Emma, as I have asked her to show me her method of hap making.  She is now 93 and is still an amazing knitter churning out beautiful lace and Fair Isle items at high speed.  She began to knit at the age of five and remembers knitting spencers (plain knitted wool vests) and gloves and selling them to the grocery van that came around once a week.  They would get sugar, flour, tea and hens meal, in exchange, things that would supplement the items they grew on the croft.
Astonishingly she works from no patterns and has no notes written down at all, everything she makes is from memory and from a deep rooted understanding of the craft.
She made her first hap in 1944 in anticipation of the birth of her first daughter and has probably made hundreds since!  Haps were used (and still are) for swaddling babies so makes an ideal gift for a new baby.
Aunty Emma knits her haps using the old traditional method of knitting the edging first in a long strip, then knitting the border (the stitches of the straight edge of the edging are picked up and make the first row of the border) and then finally knitting the centre.  This method is referred to as the borders inwards method by Sharon Miller in her inspiring books on Shetland lace knitting.  More modern patterns are written starting at the centre first and working outwards.
Here she is knitting a piece of the edging at lightning speed.  I tried to write down what she was doing but she was knitting far faster than I could write! 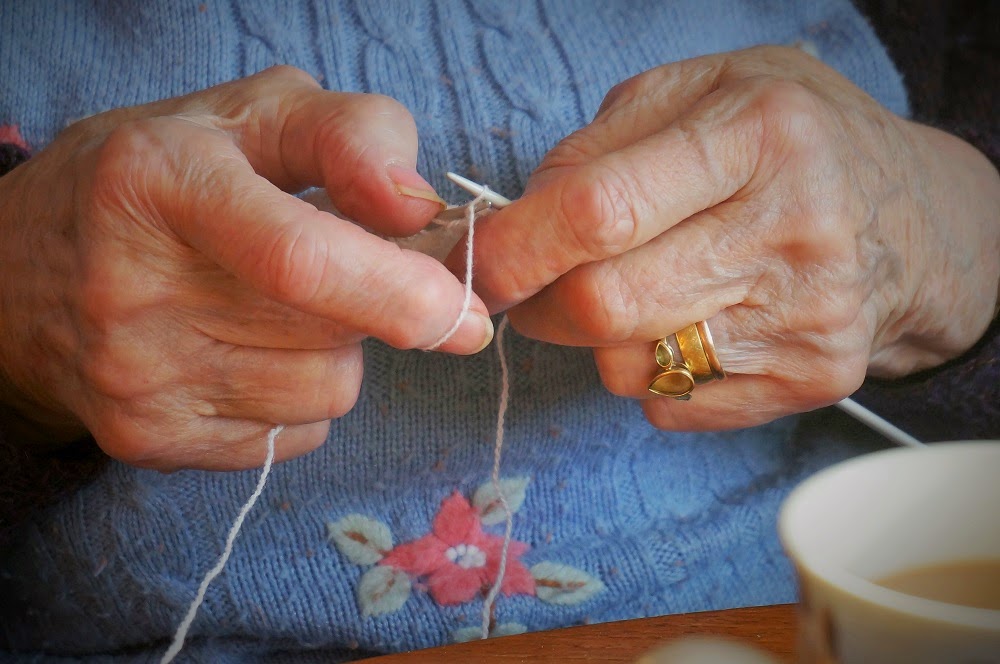 And in a few minutes here are my instructions for the edging! 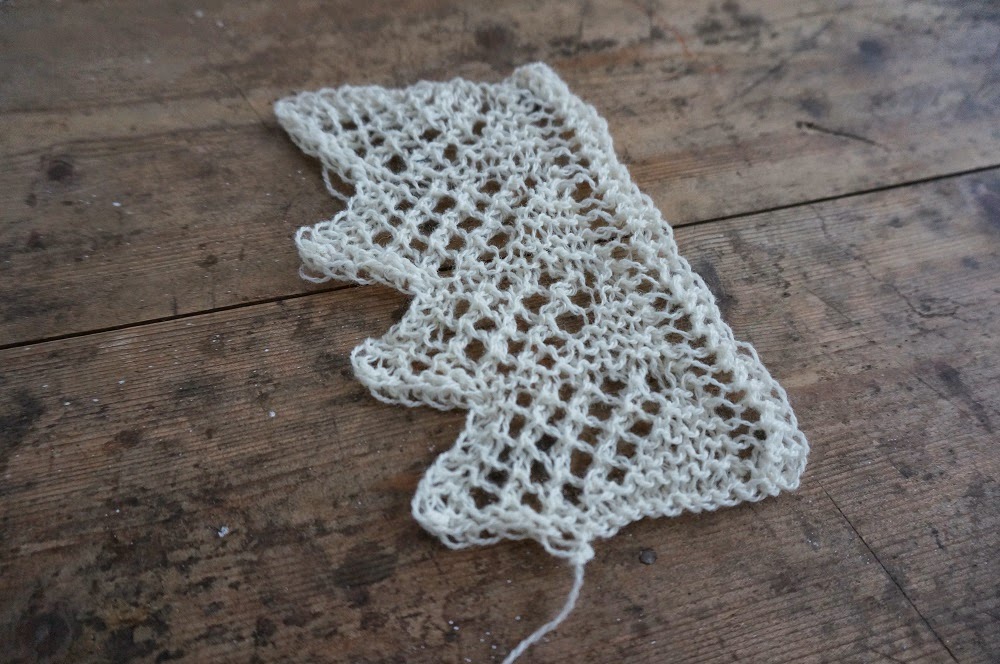 I could refer to a pattern but I would rather find out what she does.  It made me think about knitting being a language, it is like a code with series of stitches and rows on repeats.
I love the border in my hap, it is a croft house with waves below and flowers in the gaps between the roofs. 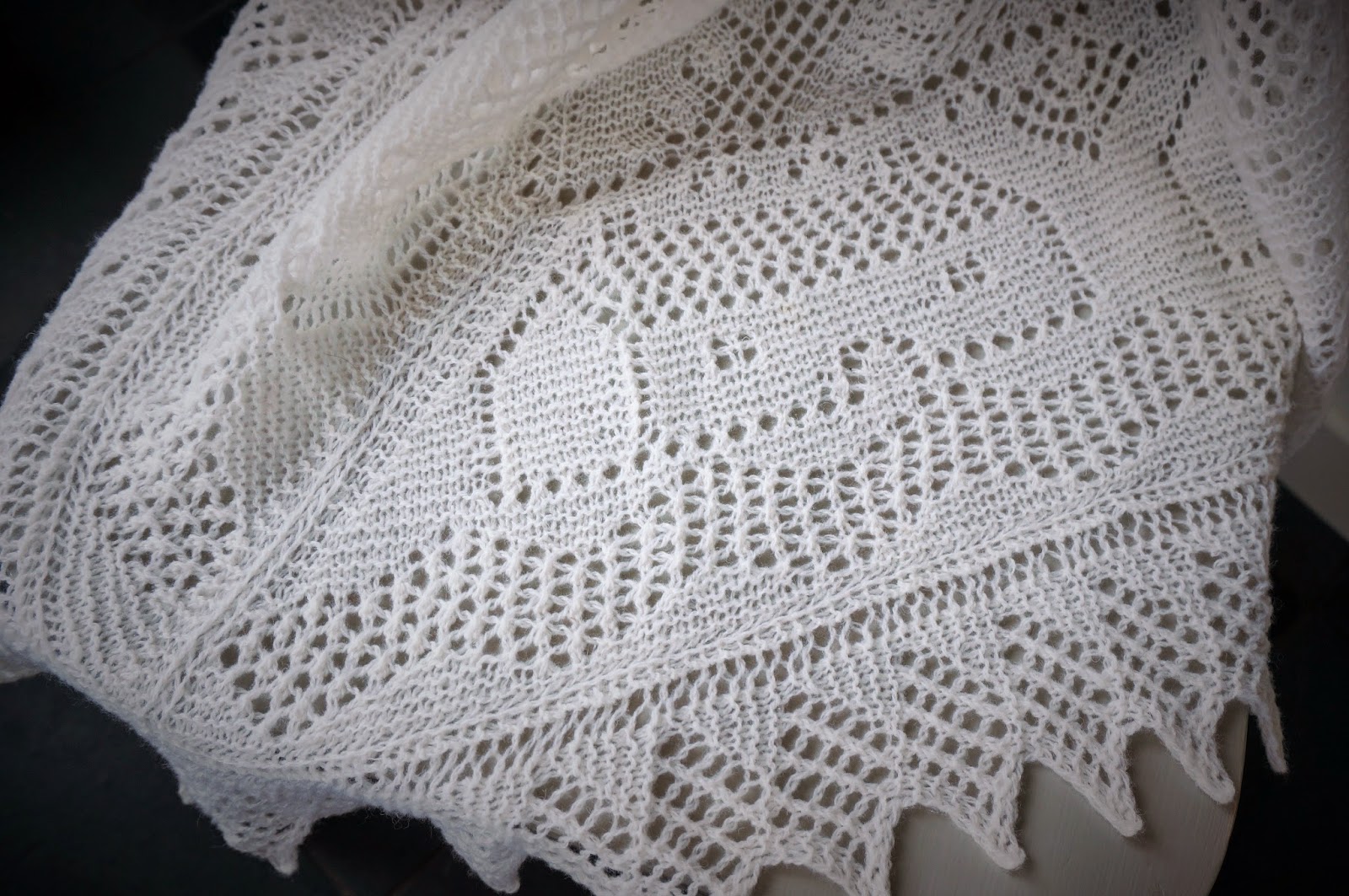 Here are some of Emma's photographs showing some examples of her haps: 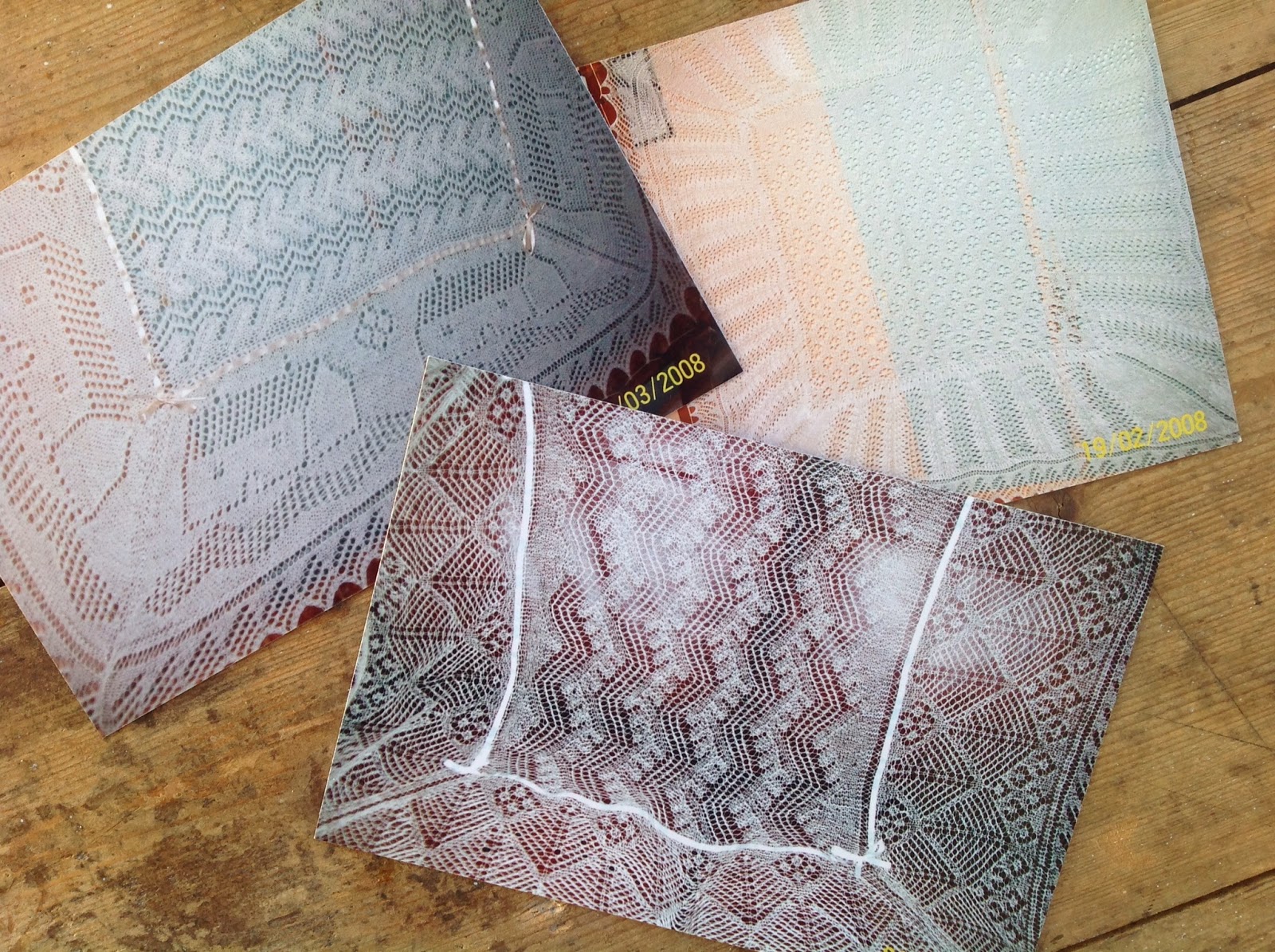 Coincidentally, over on Twitter and Ravelry I spotted two KALs (Knit Alongs) for haps or Hap-Alongs, one is being run by Louise from Knit-British and the other is being run by Gudrun Johnston.
Gudrun says a hap is a good thing to have on the go at the same time as other things which is good as I have so many things on the go!  The Knit-British KAL will begin on 10th April which gives people plenty of time to find a pattern or plan a design and finish what is currently on the wires!
Louise has also been writing about Haps, you can read her blog posts here.
I will keep you updated on the progress!
Useful resources:
Miller, Sharon (2002) Heirloom Knitting, The Shetland Times Ltd
Miller, Sharon (2008) Heirloom Knitting's Shetland Hap Shawls
Shetland Guild of Spinners, Knitters, Weavers and Dyers (2012) A Legacy of Shetland Lace, The Shetland Times Ltd