A few years ago I sang with the band Shoormal.  The music doesn't really fit neatly into any genre, it tends to go under "contemporary folk", but has many influences including from folk, country and jazz with harmony vocals being a major part in each song.  You can hear the music on Shoormal's myspace page.


We recorded 3 CDs, Indigo Skies, Migrant and Turning Tide.  The first, Indigo Skies was nominated for best newcomer in Mike Harding's Radio 2 Folk Awards in 2001.  You can buy Migrant and Turning Tide from various places including Amazon, and you can download various tracks from there too - it sems strange to think when we first started we used tapes to record new songs and ideas!  The first album Indigo Skies sold out but is due to be rereleased soon.
We travelled a little bit during our time as a band, the photo below shows us in the Hilton Hotel in Austin, Texas. 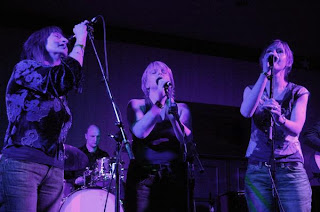 Photo: Davie Gardner
We had many band practices and many laughs along the way.  Here are some of us at Gregg's before he revamped his sitting room. 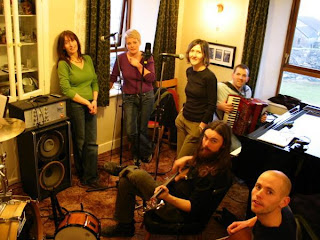 Due to pressures of business combined with the fact I am not a bit fan of performing (not a good trait if you are in a band) I "retired".  The band has continued to play in a scaled down format and with one or two different members, and played at events this summer under the name of "Freda Leask and the Shoormal Band".  A facebook page has been set up so you can find out where they are playing, updates on re-releases and other music related news.  Hop over there and have a look!
Shoormal: A Shetland dialect word meaning where the shore meets the sea.
Posted by Donna Smith at 03:17